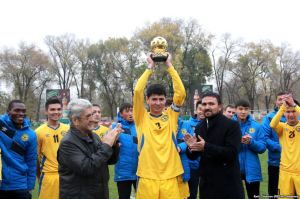 After Altyn Asyr were crowned today for the 1st time as the new Turkmenistan champions, now we know all the teams who won their respective leagues in Central Asia (Former Soviet Republics who are AFC members)

Curiously last time that Pakhtakor and Dordoi won their domestic leagues were in 2012.

Last time Istiklol Dushanbe won their domestic league was in 2011

This year also those 3 teams didn`t played in Asian competition and now they will return to the Asian scene next year.

Pakhtakor established a record of not to lose any match of their domestic league this season, a great achievement for them.

Pakhtakor will try to advance to the final stages of the AFC Champions League next year with a team that has done very good this year and has kept a very good playing level too.

also for Istiklol and Dordoi is ther 1st time they will play AFC Cup because last time they played in Asian competition were in the AFC President`s Cup in 2012 in which Istiklol claimed the champion in home soil where all matches were played at Central Republican stadium(Республиканский центральный стадион “Памир”) in Dushanbe.