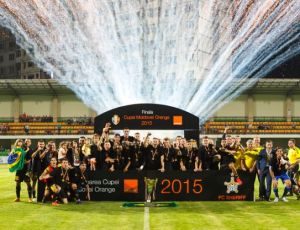 Milsami won the league in dramatic style in the last matchday, battling the title with Dacia and Sheriff, a series of results resulted positive for Milsami and in a direct encounter for the title they beat Dacia 2-1, all those 3 teams ended with 55 points at the end but Milsami had better goal difference and head to head record and that counted for them to be Moldovan champions for the 1st time in their history and also with this Milsami broke Sheriff supremacy in Moldova and now they`ll play UEFA Champions League for the 1st time starting from the 1st qualifying round.

The sad thing is that despite finishing 4th and in consecuence getting an European berth, FC Tiraspol won`t play anymore because they were dissolved, its a shame because they were always entertainers and title contenders, they will be very missed.

FC Saxan benefited from FC Tiraspol dissolution and will play UEFA Europa League for the 1st time too.