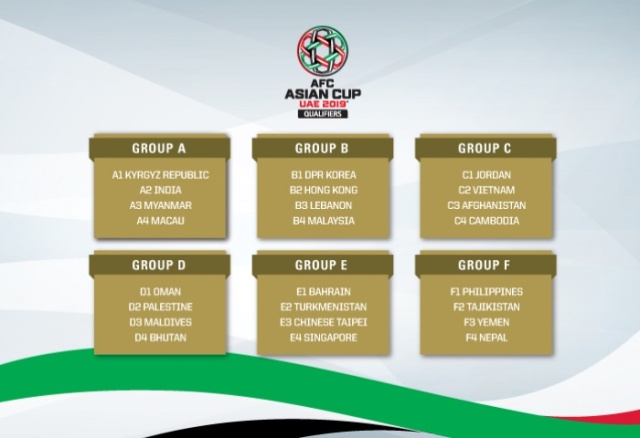 Kyrgyzstan, Turkmenistan and Tajikistan got very interesting groups and all 3 will look to qualify for the final tournament that will take part in UAE in 2019,

In Group A Kyrgyzstan really got an accesible group also because they´rehaving a great level and they have improved a lot also they´re having an excellent performance so far in this qualifiers and all these things make them one of the favorites in their group to qualify for the 2019 finals.

In that same group India is also one of the other favorites to qualify, Indian football is passing for a great moment now, just recently Bengaluru played the AFC Cup final vs Air Force from Iraq and now they will play the ACL2017 qualifiers and Mohun Bagan will play AFC Cup this year.

Macau can be a surprise in this group having as background their recent participation in the AFC Solidarity Cup in Malaysia where they finished as runner up but they left a good impression because of their amazing performance and great level of playing.

In Group E Turkmenistan got a very good draw, on paper Chinese Taipei and Singapore seems to be no problem but them but mainly Singapore will be the key team to beat if Turkmenistan want to qualify and return again to a final phase of Asian Cup, Bahrain looks to be the hard opponent for them as they are an experienced team and in 2004 they were semifinalists of the tournament that took place in China, on paper the favorites to qualify for the final phase are Bahrain and Turkmenistan as both are the strongest teams in that group.

In Group F Tajikistan also got a good and very interesting draw, last time they played each other was in the now defunct AFC Challenge Cup in Nepal in 2012, in that tournament Philippines won 2-1 against the Tajiks. In this qualifying group both part as favorites to qualify for the final phase but there is Nepal and Yemen, 2 teams that are not strong as the Filipinos and Tajiks but that they will look challenge them and will try to get a positive result against them.

Group B and C are very interesting and attractive, Afghanistan have a real challenge against very experienced teams like Jordan and Vietnam, one of their most important results so far was the 4th place in he 2014 Challenge Cup, now this time they will look for some inspiration to defy the odds and fight for win a place in 2019 final phase.

Afghanistan will play against vs Cambodia, both teams played each other in the 2018 FIFA World Cup qualification 2nd round.